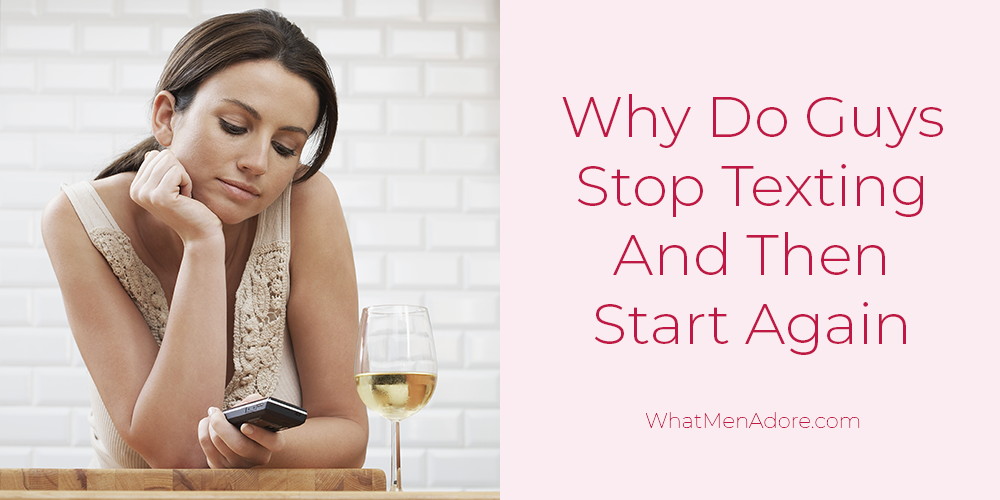 Your phone is probably the first thing you check in the morning and last before bed. You might send a text message to your love interest while at work, planning for date night when you get home or checking on how they’re feeling after their day. But what happens if he stops texting back?

I’m sure by now you’ve experienced that one guy who texts you at first and then disappears for a few days, only to start up again.

I’ve been there, I know what it feels like to not hear from your guy for weeks, and then out of nowhere, he starts texting you again. It’s a great feeling when he texts you after such a long period of silence because it means that he either misses you or wants to say hi.

Why does this happen? Why do guys stop texting and then start again?

Guy Stopped Texting Me Out Of Nowhere

I know exactly how you feel. It has happened to me—more than once. Believe me!

I know the feeling of being so anxious and excited to hear from someone, and you feel like your world is breaking down when they don’t reply. But it’s important not to keep trying after a while because if this guy doesn’t want communication, then there is absolutely nothing you can do about it on our end.

If you reach out too much, for example, ten times in one day or something similar, that may lead him away instead of closer, which means frustration all around!

What Does It Mean When A Guy Stops Texting You

Worrying about something you can’t know is of no use and wasted energy. One way to avoid this frustration is by weighing the consequences before making a decision, but sometimes there isn’t enough information available for that option either.

If so, then playing different possible scenarios will only make you drive yourself crazy and still not be sure what’s going on at the end because, in these situations, it seems as if anything can happen! So when faced with an uncertain situation, the best thing to do is try your hardest not to care too much.

Even though some people might think otherwise, feeling free from worry gives us more time we could spend doing other things or feeling happy instead of stressed out all day long.

When A Guy Stops Texting You Everyday

When a man withdraws from texting you every single day, it’s usually one of three things:

Why Guys Don’t Text Back For Days

The text messages you receive from a man can tell it all. If he’s into you, then his texts will be frequent and consistent. But what if he spaced out weeks or days apart without response to your messages?

When he doesn’t call or text for days, maybe something came up, and his life is too busy. Of course, it could just be a coincidence if the man has been ghosting on you all week, but there might still be hope!

He might be dealing with some financial trouble or issues at home, but don’t believe for a second that it’s because you’ve done something wrong, and he doesn’t want to speak to you anymore.

It would take more than just one disagreement (especially when there was never any real conversation before) for someone like him to decide they didn’t even care enough about your feelings as much as their own!

When A Guy Stops Texting You For Weeks

Should You Text Him If He Stopped Texting?

It is never a good idea to text someone excessively when they no longer respond. Stalking men will make you appear desperate and insecure, which can be seen as unattractive qualities.

It might even lead the person to think that your texting has an ulterior motive behind it or there’s something wrong with you if he won’t stop responding for weeks on end.

You are deserving of someone who pays you attention and values what they have. If a guy stopped texting with no warning, then it’s time to move on from them because there is not enough respect in this relationship for you or your feelings.

The 24-hour rule is an essential strategy because it ensures you do not appear too desperate to the guy. After a first date, you should send only one text within any given day, and if he does not reply after that time frame, you need to let him go. If he has no response after sending two texts in this timeframe, it could mean that there are some significant issues with your compatibility, and you should just cut ties now before more messages go by without a reply.

What To Do When He Stops Calling And Texting

When somebody isn’t responding to you, it is vital that they feel like you heard their voice the first time. Bombarding a man with messages won’t make this happen and could lead to an uncomfortable situation in which one person feels unheard or, even worse: ignored. Instead, give a message some space; let your words be carried by silence for once instead of making noise constantly.

It’s acceptable to reach out to him one or two times so that you know what the deal is. If he hasn’t responded in three days, shoot him an accessible, simple text and see if that makes a difference.

It’s best to humorously ask him, so he doesn’t feel like you’re too clingy. For instance, please send him a funny picture or video that he will enjoy when the first response comes through from him; then, it’ll be easier for both of you to find things to talk about with each other on your following conversation together.

If he never reacts to anything you do, seriously, forget him and move on. Giving up the chase is always an option if they don’t live up to your expectations in any way or show interest back. Remember that there is plenty of other fish out in the sea which will be more than happy with a text message from you!

If you’ve ever wanted to know how to truly understand any man, then you are in the right place.